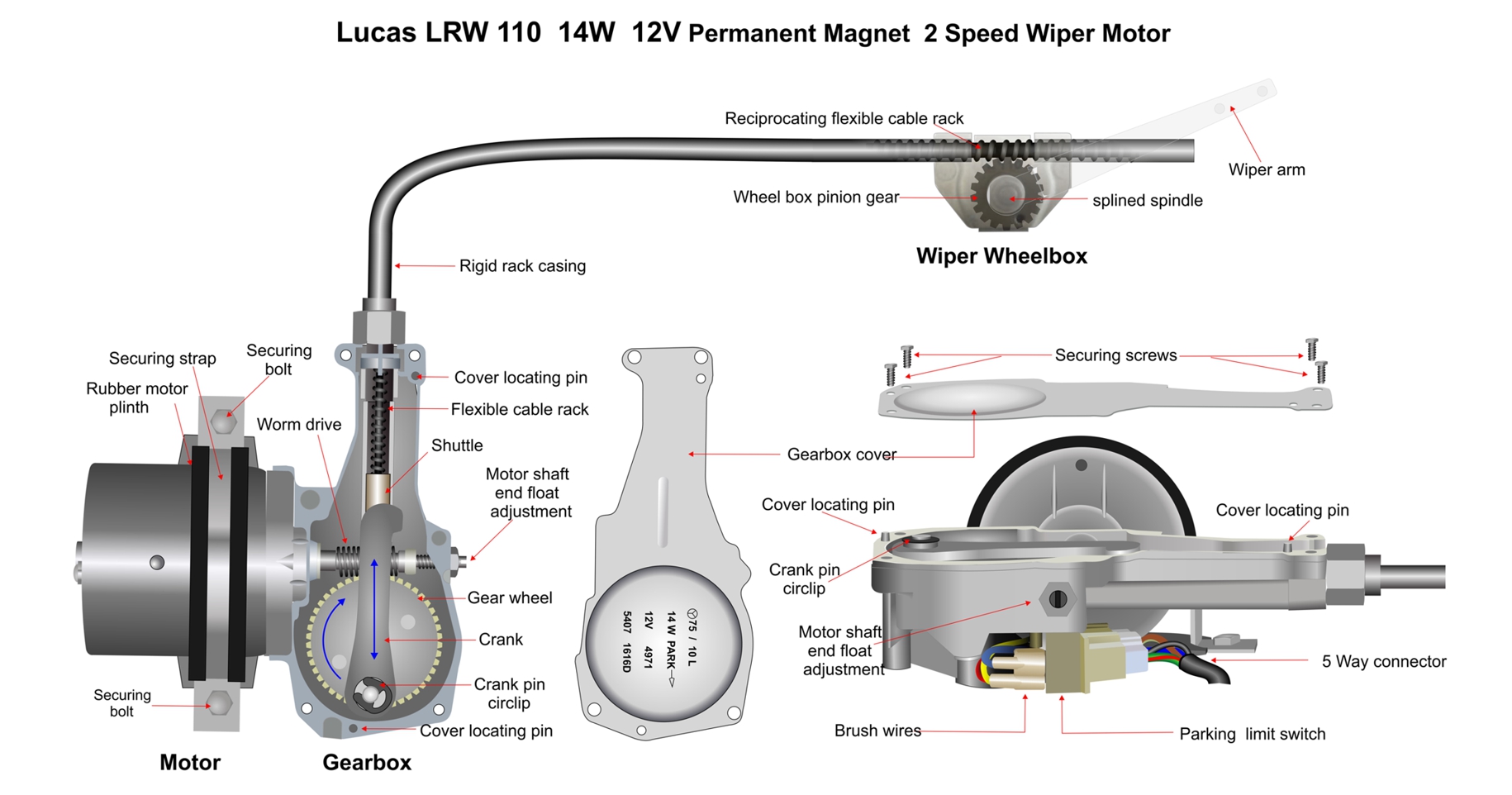 The windscreen motor described here is a Lucas 14W 12volt permanent magnet type. If you own a pre 70's Morgan you may find it has a Lucas CRT 15 field wound motor. Permanent magnet motors are more efficient than field wound motors. The way you can tell the difference is by observing the shape of the motor. If it is rectangular in section it is field wound, whilst permanent wound motors are cylindrical. The gear box, rack and wheel boxes are similar on both types of motors, so much of which is discussed here will apply to both types. The motor drives a gear wheel via a worm drive and a crank on the gear wheel drives a flexible cable rack in a reciprocating motion. The rack is guided in the gearbox by a shuttle running in a machined channel. Rigid steel bundy tube is attached to the end of the gearbox and guides the spiral wound rack to the wiper wheelboxes, where the rack engages with gear wheels which drive the wiper blades.

Before working on the wiper motor, disconnect the battery, then remove the 5 way wiring connector. To remove the motor from the bulkhead, it is necessary to remove the gearbox cover first. After removing the four securing screws the cover can be lifted clear to expose the main gear wheel, crank and flexible rack. Remove the crank pin circlip and remove the crank, noting the position of washers, which should be carefully recorded and stored. If the motor has not been malfunctioning, it is wise to put the circlip back on the crankpin and re-fit the cover using the 4 securing screws. This will avoid losing the circlip and screws. The motor can now be released from the scuttle by removing the two retaining strap securing bolts. An anti-vibraton rubber lines the securing strip and the motor sits on a rubber plinth. If either are missing, they must be replaced to prevent vibration and noise.

Most of the spares for the motor are available from Auto Electrical Spares. If you do not want the inconvenience of fixing an old one, they will sell you a new one for around forty pounds.

Intermittent, lost motion or incorrect sweep of the wipers may be due to wear on wheelbox gears or the spiral wound cable rack. The Flexible cable rack can be removed from its crank pin after removing the crank from the main gear wheel as described above. The windscreen wipers MUST be removed first, by pulling them off the splined shafts. The rack can then be removed by simply pulling it from the rigid steel tube. If a force greater than 6 pounds has to be used, the problem may be due to siezed wheelbox gears or lack of grease. Excess force should not be used. The wheelboxes are secured to the rigid rack casing by two bolts which hold the backplate to the wheelbox, which acts as a clamp on the tubing. Flared ends on the tube prevent it from pulling out of the wheelbox casing. By loosening the bolts the wheelboxes can be removed. On reassembly the rack and boxes must be greased with high melting point grease. If the wheelbox gears or rack are worn they must be replaced. Wiper boxes and racks can still be purchased, but always check that the boxes and rack match. Stafford Vehicle Components supply most of the parts and also offer a complete system for both three and two wheelbox types. Wheelbox gears have to have the same number of teeth as the ones being replaced, otherwise the ratio to the main gearbox wheel will be wrong. The flexible rack will also have to match. It is wise to phone the supplier for advice, before ordering.

A malfunctioning motor may be due to worn brushes. To examine the brushes, remove the two long bolts passing through the motor casing and magnetic yoke.The casing and armature can then be withdrawn. This will reveal the brushes mounted on a pad screwed to the motor housing end plate. The pad can be unscrewed and removed complete with the brushes. The brush wiring is shown in Figure 2. The blue wire is connected to the negative brush, which is placed opposite the positive low speed brush which is attached to the red wire. On a single speed motor these would be the only brushes required. The yellow wire is connected to the high speed brush, which is smaller than the other two and is closer to the negative brush. There are fewer armature windings between the high speed and earth brush, so resistance is lower, therefore the current is higher and motor speed will be greater.You should never run the wipers on the faster speed when the windscreen is dry or covered in snow. The higher current required to overcome excess friction can cause the armature windings to over-heat and they may burn out. If the small brush is worn down to its shoulder, it is time to change them all. It is not worth fiddling with individual brushes. You can obtain a complete pad with fitted brushes for less than ten pounds. Clean and examine the commutator before installing the new brush set. After screwing the new pad onto the motor casing end plate, it will be necessary to tie back the brushes against the springs before engaging the commutator. Cotton or thin fuse wire can be used, but be careful to remove all traces of it before finally assembling the motor. If the motor is beyond repair you can purchase a new one from them for around forty pounds.

Wipers refusing to stop until the ignition is switched off may be caused by the wiper motor park switch. When the gearbox crank is aligned as illustrated in Figure 1 , the limit switch is set in the 'off' position by a cam on the underside of the gear wheel. When the dashboard switch is in the 'on' position, power is fed to the motor and the gear wheel rotates, resulting in the operation of the windscreen wipers. As soon as the gear wheel rotates away from the park position, the parking switch is set to the 'on' position. When the driver switches the wipers 'off', the parking switch continues to deliver power to the motor, until the cam on the underside of the gear wheel reaches the park position and the switch is set to the 'off' position. If the switch fails or the cam is badly worn, the wipers may continue to run. The switch is attached to the underside of the motor housing by a small metal clip and should it need replacing, new parking switches can be supplied by Auto Electrical Spares.

Parking Switch Contacts are labelled X and Y in Figure 3.

NB When the ignition is switched "ON" Terminal 4 is always at 12v positive potential. Terminal 2 is isolated from terminal 4 every time the cam activates the Park switch actuator, and contact X shorts to contact Y, resulting in terminal 2 being earthed.

Stage 1 The wiper 'ON/OFF' switch is set to slow speed. Terminal 3 is isolated. Terminal 5 becomes live via the auxiliary fuse. The slow brush attached to the red wire becomes live and the motor runs slowly.

Stage 2 The wiper switch is set to fast speed. Terminal 5 is isolated.Terminal 3 becomes live via the auxiliary fuse. The fast brush attached to the yellow wire becomes live and the motor runs fast

Stage 4 The wiper 'ON/OFF' switch is set to 'OFF'. Terminal 3 is isolated. Terminals 2 and 4 are isolated from each other, which isolates Terminal 5, as the cam on the gear wheel begins to depress the park switch actuator down on contact X. Now the motor is receiving no power and decelerates, but runs on due to its momentum.

Stage 5 An emf is set up in the armature as is still rotating in its magnetic field. Due to the profile of the cam on the gear wheel the park switch actuator continues to press down until contact X (an extension of Terminal 2 )shorts out to earth on contact Y (an extension of terminal 1). The armature now shorts out to earth via terminal 5 and brakes abruptly due to regenerative action. The cam and park switch are aligned so that the wipers stop in the park position..

Removing the Wiper Assembly from the Scuttle

The battery must be disconnected before working behind the dashboard. The reciprocating flexible cable rack and wheel boxes are supported by the scuttle. Their removal is made easier if the dashboard is removed, otherwise the dashboard wiring can make things a little difficult. During a rebuild removing the dashboard is easier, because the wiring loom will have been disconnected and the steering column removed. However, if a fault develops with a wheelbox or the rack during service, there is is just enough room behind the dashboard wiring to remove the windscreen wiper assembly without knocking too many wires off. If you do accidentally dislodge any of the wiring, refer to the Dashboard Wiring diagram. Most wires are connected to the instruments and switches using 4.8mm Lucar connectors and will simply push back on.

The windscreen wiper arms must be pulled from the splined wheelbox spindles before attempting to remove the wiper assembly from the scuttle. When the crank has been disengaged from the wiper motor gear wheel, as described above, the flexible cable rack can be withdrawn through the rigid rack casing. The wiper wheelbox spindles should continuously rotate until clear of the rack. Whilst both wheelboxes are still engaged the drag on the flexible rack should not exceed six pounds. This can be checked with a spring balance. If the drag exceeds this figure, it may be due to partially siezed wheelbox spindles or a lack of lubrication. Intermittent rotation of the spindles whilst withdrawing the flexible rack, usually indicates wear on either the wheelbox pinion gear or the flexible rack. Replacement rack or wheel boxes should also be available from Auto Electrical Supplies. Having withdrawn the flexible rack, the securing nuts on the chrome spacers can be removed(see Figure 3). The wheelbox on the nearside can be seen if you look upwards in the glove compartment (assuming your glove compartment is like mine, which has no top). If the nuts are slackened on the nearside wheelbox, it should be possible to remove the section of rigid rack casing that passes through the bulkhead. It should now be possible to remove the rest of the rigid casing and offside wheel box from the scuttle.